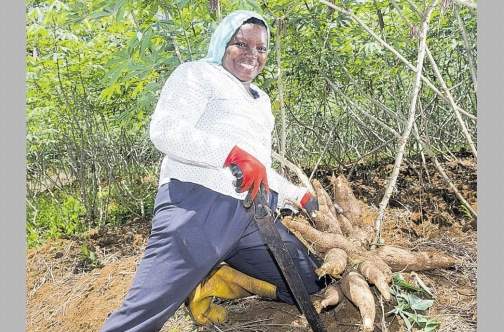 In the rolling hills of Wallen, St Catherine, lie extensive acres of farmland yielding a bounty of produce. Here, farming is mostly pursued by men; however, 57-year-old Olive Morgan-Gordon is among the few women challenging the norm, in the field labouring from dusk till dawn.

Gordon’s roots in farming took shape in Mango Grove, St Catherine, where, at 17-years old, she became pregnant and dropped out of school. With family land lying idle, she decided to turn it into an income earner by planting tomatoes, gungo peas and corn. As her crops flourished, so did her love for the land.

“I realised that life comes from the land and I discovered that I could use my hands to put food on the table. Every time I reaped the crops I felt proud because I could provide food for my family,” said Gordon.

After moving to Wallen she soon began planting a variety of crops, but it is cassava that has been her mainstay. While cultivating the crop is easy, there was also a downside.

“Finding a ready market for cassava was difficult so sometimes I would sell and other times I wouldn’t because nobody was buying. I had to start planting cash crops like coconut, apples and sweet pepper and I even started raising chickens to help make ends meet,” Gordon commented.

“I just knew that things would be better once I found a stable market for the cassava I was growing.”

Barbados Celebrating Local Food To Save
Chocolate “Made in Haiti”